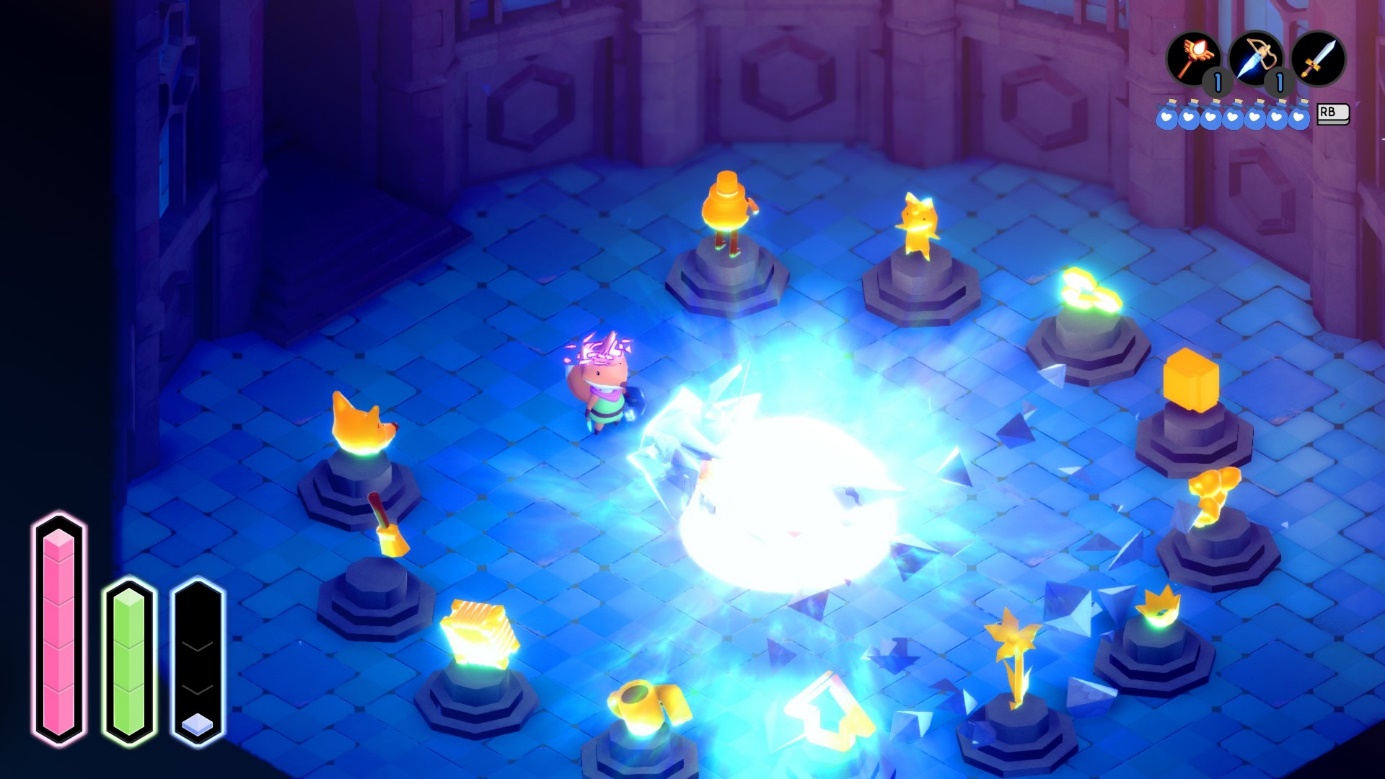 on a pedestal in a secret chamber behind the old house. Here’s where to find them.

Tunic is filled with many kinds of secrets – some are small, little things, while other hide entire new adventures to embark on. One of the biggest secrets of the game are the 12 secret treasure chests.

How to Get All Secret Treasure Chests

The secret treasures you’ll collect will be displayed in the room with 12 round pedestals, found in the back of the Old House. After gathering 6 of them, a portal to the Glyph Tower. Let’s list all the possible treasures you can find and show where to find them.

The second treasure can be obtained near the windmill. Look at the buildings spinning sails – the patterns on their edges are the inputs you’ll need to use to get the chest. There will be a singular pink mark on the blade you need to start from and two pink marks on the last one.

Keep in mind the patterns show the direction corresponding with the d-pad when the blades are on the right side of the windmill. The pattern is: Down, Left, Left, Up, Up, Right, Right, Left, Down, Right, Up, Down.

To get this one, you’ll first have to make sure it’s nighttime. Travel to the cathedral and enter it through the front door. Than, go to the room on the left and pass the ladder to examine the wall behind it. If you press the action button, the wall will uncover a secret room with a chest. If you’ll press another button on the wall behind that chest, you’ll find yet another secret room!

You’ll notice a chest blocked by the light bridge, but to get it, you’ll have to return here during daytime. Cross the bridge and input the pattern on the wall using a D-pad – this one is left, up, left, up, right, up, left, up, right, down, right. His will unlock a back entrance to this room, which you can use to enter the chamber during daytime and get the chest. Not only will you get another treasure, you’ll also be rewarded with the “Secret Legend” Achievement!

This treasure is a reward for completing the Holy Cross Fairy Soul quest, which requires you to find 20 more chests around the world. You can check our guide on how to complete that quest, if you’re having trouble with it.

To get this one, you’ll need to have Page 51 and Page 1 of the manual. Stand in the water inside in between the road colored gold in the overworld map, extending from a small island in the southern portion of the overworld. Now, use the option’s menu to turn the music off and wait for 60 seconds.

A new message should appear on the manual’s first page. It says “The softest feather, Corrected eleven times, Departed once more.” Stand in the place indicated in the manual and input another pattern using the D-pad – Down, Right x11 and Left x12.

In the lower portion of East Forest, there is a singular enemy on a seemingly inaccessible ledge. If you’ll use your magic blade and fire rod at the same time at just the right angle, you’ll be able to freeze this enemy and use it as a grapple point. Behind it is a treasure chest with the Regal Weasel.

In the southeast portion of the swamp, there are four golden skulls you can push around. Roll all of them into a small puddle in front of a gravestone to get this treasure.

Travel to the place shown on page 11 of the manual. On that page, there’s a box saying “Prize/Treasure. If you’ll draw a pattern connecting the dots inside this box using the d-pad, starting from the small treasure chest in the upper left in this location, the chest will appear. The pattern is: Right, Down, Left, Up, Left, Left, Down, Right, Right, Down, Down.

After getting page 41 of the manual, travel to the Teleporter Room and follow the shortcut path on that page by using the teleporter dash. At the end you’ll find a treasure chest.

This one is found in the Hero’s Grave in the Forest Fortress, but you’ll need the Teleport Dash to get it. There is a room with four piles of leaves at the end of a rock path leading north. Slash all four piles and a chest will appear.

In the farthes southwest portion of the Ruined Atoll, there is a small island you can teleport dash too, with a statue of an enemy that looks like Thowp from the Super Mario franchise. In front of it is a chest with the treasure.