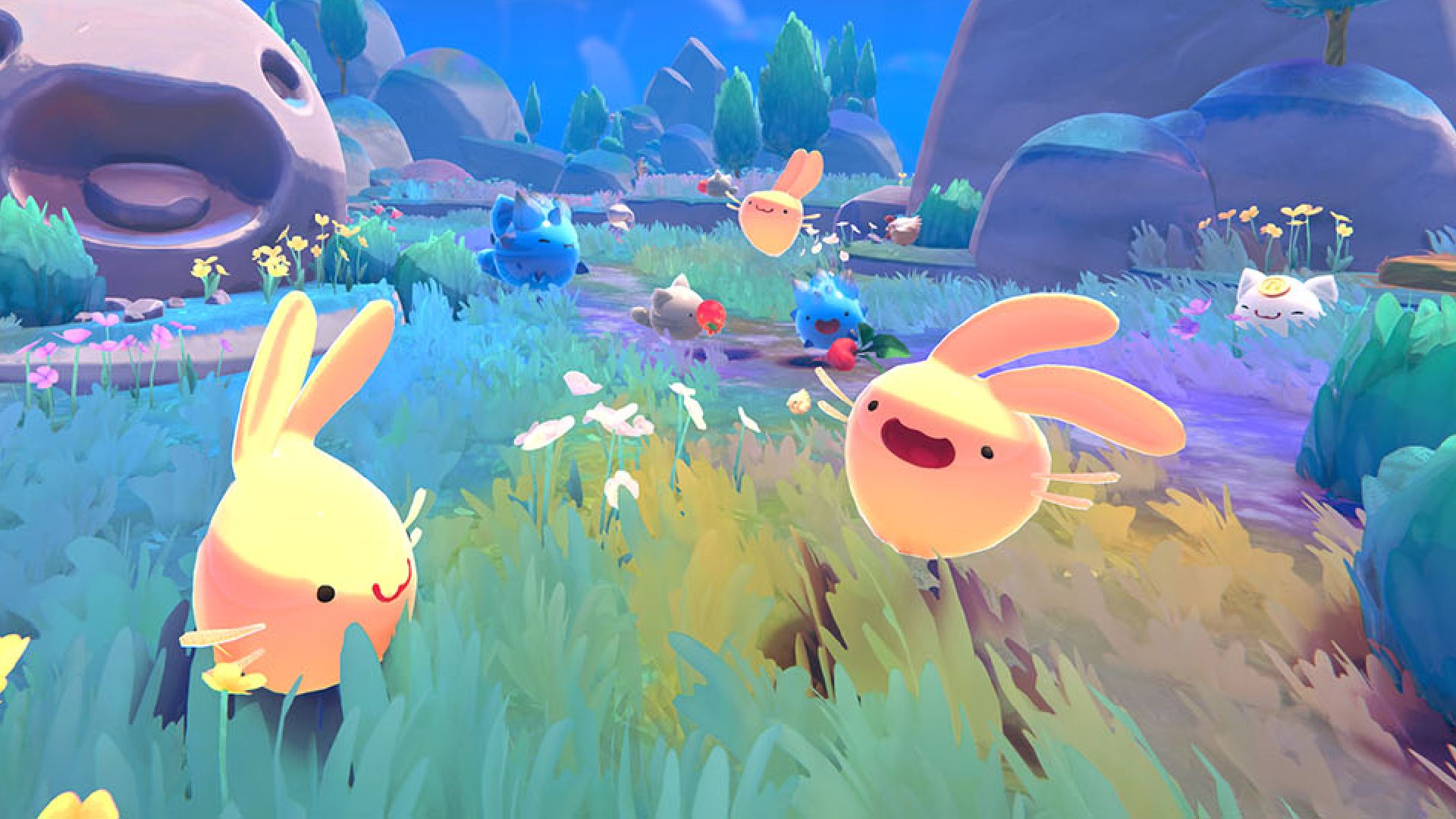 Slime Rancher 2 features Beatrice Labeau tracking down slimes in a direct sequel to Slime Rancher, albeit exploring the all new region of Rainbow Island.

There are a ton of returning slimes previous players will be well acquainted with, along with a handful of new slimes, new food, new features, and new resources.

We’ll go over the new sets of slimes in our all new slimes guide – what food they like, and where to locate them. We’ll also touch on the returning cast of slimes from the OG Slime Rancher.

All New Slimes in Slime Rancher 2

First, for those who did not play the first Slime Rancher – there are dozens of slimes from the original game that have returned to the colorful world of Slime Rancher 2. These include:

The new slimes you’ll be able to find in the game are often cute, including two new slimes based on bats and Anglerfish that somehow still manage to be endearing when transposed into the world of Slime Rancher:

Cotton Slimes are very explicitly based on the look of the Cotton-tail Rabbit, and as a “starter slime” tend to be much more easily obtained. They’re staunch veggie eaters, with their favorite food being Water Lettuce.

They’re one of the first slimes you’ll encounter in the game – heading out from The Conservatory to the west will set you out in an expansive field full of Pink and Cotton Slimes.

You’ll probably notice them bouncing around, as they are said to be one of the highest jumping slimes in Slime Rancher 2. As such, you’ll want to ensure you get the ‘High Wall’ upgrade for them once you put them into Corrals.

You also want to avoid putting them too close together with Pink Slimes, as they will consume them and become a Largo.

We’d recommend feeding them lots of Water Lettuce to get plenty of Plorts to sell.

Flutter Slimes are based upon the visual look of the butterfly, most notably the Monarch. Tracking them down is a little more difficult than with Cotton Slimes, and they love to fly around.

Flutter Slimes are most commonly located on Starlight Strand Island. You’ll find them concentrated towards the southern part of the island. You’ll need to defeat the Cotton Gordo to gain access to the island.

Flutter Slimes require a new food item not previously seen in Slime Rancher – nectar! Moondew Nectar will double the amount of Plorts they produce, and can be located throughout Starlight Strand. Moondew Nectar can be found on flowers as single items and cannot be used in a garden. Having the Jetpack will make exploring the island a lot easier in terms of obtaining both Flutter Slimes and Nectar.

You’ll also need to make sure you have an Air Net to prevent them from escaping from the Corrals.

Angler Slimes are based on the much more menacing real-world Anglerfish. You won’t find these slimes hanging around earlier in the game regions of Rainbow Fields. Instead, you’ll have to travel over to Starlight Strand. Again, to access this region you will have to feed the Cotton Gordo in Rainbow Fields to gain access to the teleporter. They can also be found in Ember Valley, which you’ll need to follow a similar process to access.

Angler Slimes are carnivores, and their favorite food is that of a sea hen! Sea hens can be found throughout Rainbow Plains and are fairly plentiful – you should have no problem keeping your Angler Slimes happy.

Batty Slimes are very clearly indebted to the look of real life bats, with a purple-blue color, red eyes, and wings. Batty Slimes can also be found in Ember Valley – they are a ‘docile’ slime type that likes to eat fruit. They won’t be aimlessly wandering around, but will instead be found in darker regions within Ember Valley, like caves. Their favorite food is the pomegranate.

Much like with Flutter Slimes, you’ll need to ensure you have an Air Net to keep them from escaping the Corrals.

Ringtail Slimes are probably among the most mischievous of the new slimes and like to steal at night time, turning into statues during daylight.

Users compare them to raccoons, which they are most likely based upon given their penchant for stealing. Given that they turn into stone during daylight, you can pick them up like a largo during this time in Ember Valley, and have them return to their original form at night. This is really the only way to capture them, as they are extremely difficult to capture at nighttime.

They are a much more rare form of slime, and eat an omnivorous diet with no particular favorite food. If you want to prevent them from turning to stone in your Corrals, you’ll need to invest in a Solar Shield.

Terra Invicta: Factions Guide | All You Need to Know

Know all about the factions and their victory conditions. Terra Invicta is going to have its Early Access on September 26. It is a strategy simulation game, where you are going to play as one of the factions ito take control of Earth and expand across the Solar System. We are going to tell you all about the factions that you can play in the game.

Factions Guide, All You Need to Know in Terra Invicta

Terra Invicta is all about controlling the humans as you are threatened by an alien invasion. You can fight with them or fight for them, appease the aliens, or escape from them by fleeing the solar system. You can even expand beyond Earth by establishing colonies on other planets. There are 7 factions that you can play as.

All of the factions play very differently from each other, and each has different victory conditions.

Resistance is the faction that ensures humanity’s survival. The victory condition for them is to protect all of humanity by resisting the alien invasion. It is also the only faction that has a tutorial, so it is advisable to play it first.

The Initiative is about exploiting the aliens. They are all about power and they will do anything to obtain it.

The Servants have an easier playthrough. They worship the aliens religiously and they must help the aliens by any means necessary, so you are going to clash against other factions.

The Protectorate wants to protect humanity by appeasing the aliens, unlike the Servants that want to serve the aliens.

The Academy is all about standing equally with the aliens, but the aliens have better technology and have made many colonies. It is a difficult playthrough as you need to convince the aliens to win.

Project Exodus is about leaving Earth and fleeing the aliens. It is all about space development.