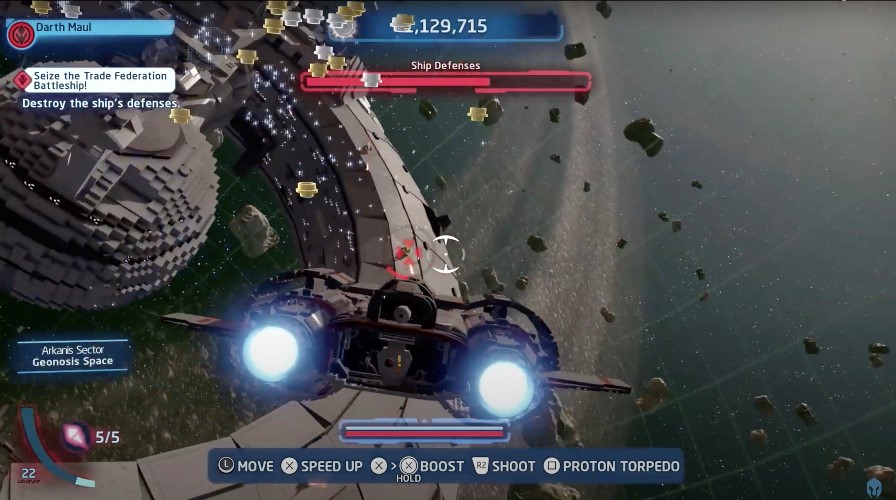 LEGO Star Wars Skywalker Saga showcases a plethora of ships, from the monstrous capital ships to the smaller mini ships. These vessels, which help you explore and grind, can be obtained by completing certain objectives. So, how do we add them to our arsenal?

Capital ships are big ships that can be used as Battle Stations. LEGO Star Wars Skywalker Saga lets you summon five of these, namely the Death Star, Death Star II, The Executor, Steadfast, and Trade Federation Battleship.  In this article, we will be walking you through the steps on how to unlock all capital ships in the game, including which map to travel to, quests to complete, and NPCs to talk to.

Start your journey to unlocking Death Star I by completing Episode IV and traveling to Coruscant’s Federal District at least once. Once you have fulfilled these conditions, go to Yavin 4 Great Temple and proceed to the higher floor. Interact with the NPC that will trigger the quest named Operation Stardust. Completing it will unlock the Death Star. It costs 2 million Studs.

The prerequisite of adding Death Star II to your collection is finishing Episode VI and completing the Doom Ball III quest in the Endor Ewok Village. Once you’re done with the side mission, talk to the Ewok Engineer to unlock the Death Star II.

In order to unlock The Executor, it needs to be lured out and taken over. To do this, head to the Tatooine Space and fly around until you see combat zones, which are represented by red icons on the screen. Engage in at least three to four Space Battles to summon The Executor. Upon spawning, you will need to take control of the capital ship by destroying it. It can then be purchased for 5 million Studs.

Like The Executor, the Steadfast can be unlocked by making it yours. According to the Rumor, it spawns in Cantonica, Exegol, Jakku, and Pasaana. Complete two to three Space Battles to lure the ship out into the open. After disabling its defenses, Steadfast can be bought for 3 million Studs.

Completing the list is the Trade Federation Battleship, another seacraft that only spawns after engaging in Space Battles. As per the Rumor, it appears in Geonosis, Mustafar, Naboo, and Utapau. Go to Geognosis Space and proceed to the red circles on the map, these are combat zones. After winning a few battles, the Federation Battleship should appear. It costs 3 million.