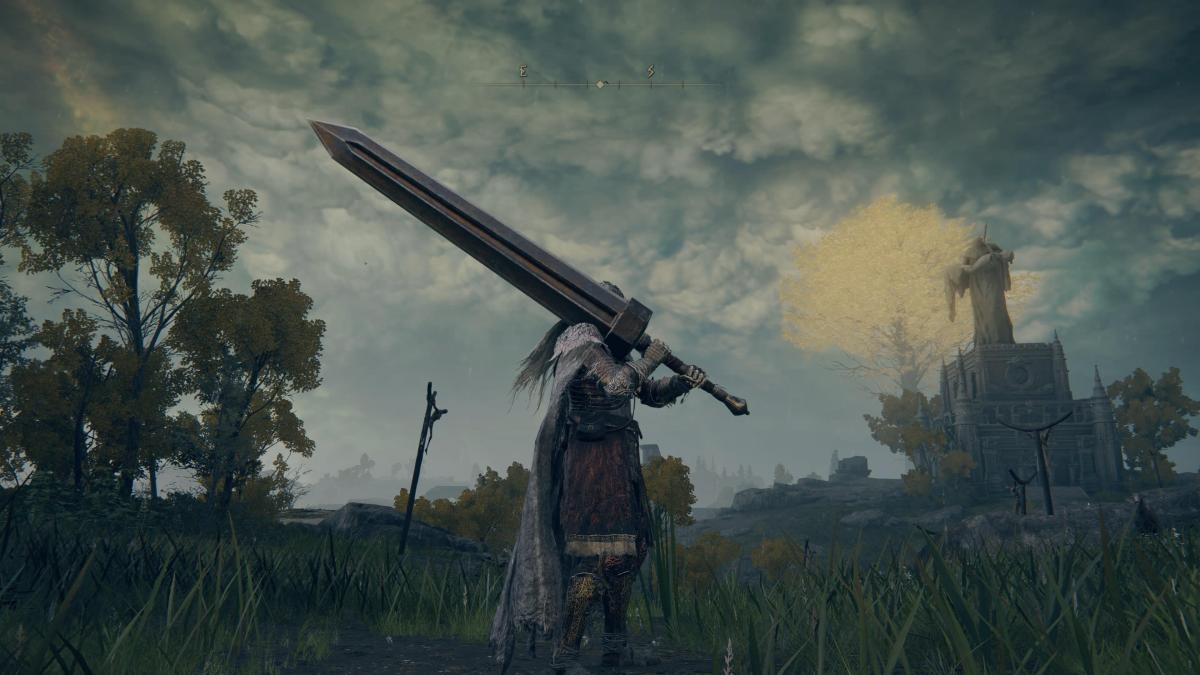 Moreover, with the right build and talismans, their damage potential is absolutely insane. If you want to rock one, then it only makes sense to go for the best Strength-scaling weapons in the game. Let’s have a look at what these are.

Without further ado, here are the 7 best Strength-scaling weapons you can get in the game:

Despite the name, the Greatsword actually belongs to the Colossal Swords class. It’s not as crazy as the other weapons in this list, but the fact that you can get it early on means you’ll be able to start rocking a Strength-based build with this weapon as your main.

It can be infused with an Ash of War of your choosing, and with a Heavy infusion, you can get its Strength scaling to A at +25. To get this, you’ll want to head over to the Caelem Ruins grace of site in Caelid, then from there, just head northwest to the caravan and loot the weapon from it.

Ghiza’s Wheel is a Colossal Weapon that has an Ash of War unique only to this weapon. It’s more akin to a pizza cutter in terms of design, and the same can be said for its AOW.

Basically, its AOW, Spinning Wheel, allows you to spin its bladed wheel to deal continuous damage to your target. You can hold it for as long as you want until you deplete your stamina. You can even use it while walking. Apart from that, the weapon comes with an innate blood loss buildup which can proc every time you hit your target with its Ash of War.

This weapon can be looted from Inquisitor Ghiza who will invade you in the room up the stairs in the Volcano Manor grace of site.

The ultimate Unga Bunga weapon, the Great Club is perfect if you want a really simple but effective Strength-based weapon. It has the Golden Land Ash of War which can’t be replaced, but this one sure does a lot of damage when it hits its targets.

Also, the weapon gets an A scaling in Heavy infusion at max upgrade level, which is the main infusion you’d want to get if you’re rocking a Strength-scaling weapon.

The weapon can be looted from the Stonedigger Troll boss which you can find in the Old Altus Tunnel.

The Ordovis’s Greatsword belongs to the Greatsword class. Its moveset is pretty much like any greatsword in the game. However, its Ash of War (which is unique only to this weapon) can deal a ton of damage if it hits.

The Ordovis’s Vortex is a really powerful skill that can hit hard and can even be charged to deal even more damage. It performs a heavy slam AOE attack on a medium area, making it ideal for clearing out mobs. It also has a ripple effect depending on how long the weapon was charged. Each ripple effect can quickly stack up, causing it to deal massive damage and even heavy stagger.

To get this weapon, you’ll have to defeat Crucible Knight Ordovis who can be found inside the Auriza Hero’s Grave.

From its appearance alone, you can easily tell that this weapon hits hard. At max upgrade level, it can get an S scaling in strength, making it perfect for builds that rely on that hit. However, it also scales off of Intelligence, albeit poorly.

The reason is that this Colossal Sword also deals a bit of magic damage. However, that’s actually not the main selling point of this weapon. Instead, its main feature is its Ash of War, Wave of Destruction, which slams the weapon to the ground to deal massive damage and fire off a wave of gravitational force in a straight line.

It can even do heavy staggers, making it a really powerful Strength-scaling weapon. Its charged strong attacks also release a bit of gravity magic which can deal a bit of poise damage against your target, though you’re better off capitalizing on its Ash of War.

To get this weapon, you’ll have to fight the Crucible Knight and Misbegotten Warrior duo in Redmane Castle Plaza.

The Prelate’s Inferno Crozier is a Colossal Weapon that has the design of a mace but with the skill that allows you to plow through your enemies. Its Ash of War which is called Prelate’s Charge can be held down to use in a shovel-like fashion, charging through enemies while wrapped in flames and then scooping them up at the end.

It can get to A scaling with the Heavy infusion at max upgrade level, further increasing its damage output. However, it’s best to focus on its Ash of War rather than its normal attacks as they’re painfully slow to even hit your target.

My personal favorite of all the Strength-scaling weapons, the Giant Crusher can deal a fuckton of damage with the right setup. Obviously, it gets an S scaling at max upgrade level with the Heavy affinity. Slap the Royal Knight’s Resolve to this thing, and you can easily see damage numbers of 2000 upwards.

You can make it even crazier by dual wielding two of this weapon, activating Royal Knight’s Resolve on both of them, wearing the Claw talisman, then performing a jumping attack on your target. This thing is OP, period.

ALSO READ: Genshin Impact: Echoes of an Offering is Bugged | Why High Ping Players Should Avoid it?