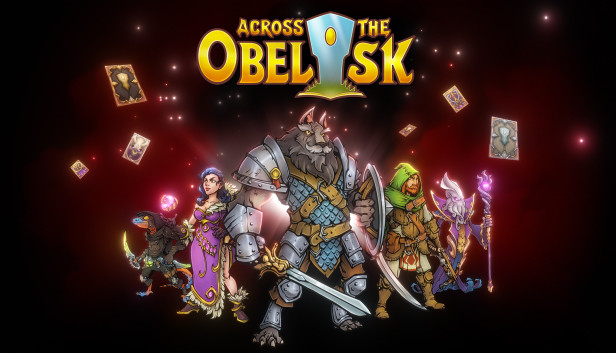 Across the Obelisk has 4 Character Classes, 4 Characters for each class making it a total of 16 Characters in the game.

You will start with 4 characters namely Magnus, Evelyn, Reginald and Andrin. As you progress through the story, you unlock different characters by doing their quests and meeting their requirements.

Guide to Unlock ALL Characters in Across the Obelisk

Today, we are going to guide you on how to unlock ALL these characters in case you might have missed some along the way.

GRUKLI- You can get Grukli by completing the fishing contest. Head over to Senenthia Lake where you get the Big Fish Item.

With those in the bag, head on over to Grukli by the waterfalls in the green portal and give it to him.

HEINER- Go talk to Heiner when he becomes available to trigger his quest. After that, you have to complete ACT 1 for you to access the red portal.

Here, you would be given the option to go to the black forge. Completing the fight will unlock Heiner.

BREE-  Start by talking to her over in the blue area to activate her quest. Continue your progress into the game up to ACT 4 where you will have to select the path that leads to the second floor where you plant a seed to obtain the Green Lock. Show this to her and she joins your party.

THULS- To unlock Thuls, talk to him at the Water Mill. Afterwards, head on to the green portal to take you to the Spider Lair. Defeat the Boss inside to unlock Thuls into your team.

SYLVIE- She is one of the easiest characters to unlock. You could obtain her in 20 minutes starting the game. To do that, all she needs is the moonstone quest item at the Forest Glade.

Passing through the Glade, you have to battle the moon ritual. After defeating the boss, wait a few seconds and wait for the gemstone to show up. Pick it up and head on to Sylvie for her to join up.

GUSTAV- You need to have 600 gold when obtaining Gustav. Head over to the green zone in ACT 2 and go to the boat pier at the bottom of the map. From there, pay the boat 600 gold to take you to Gustav and unlock his quest.

Afterwards, head over to the Maniac Mansion in ACT 3 Blue Area and clear the event. When that’s done, Gustav would Join your team.

WILBUR- He can be found in the Red Pool. Head on over and talk to him to unlock his quest. Like Bree, continue with your story progress until you reach ACT 4.

Once you get there, head over to the Library on top of the map and search for the ancient knowledge which is part of his quest. With that done, Wilbur will be available for you.

ZEK-  to unlock him, you need to play A Grave on the Road Event in Act 1. Here, you should select the Profane and dig for the key. Once you finish that, you head on over to where Zek is in ACT 2 to give him the key. He is located in the Sewer Outlet in the Blue Area.

OTTIS- To unlock Ottis, talk to him over at the Chapel. You would then need to go to the Bandit Camp and defeat the boss there. After the battle, Ottis would ask to join up with your group.

MALUKAH- She can be obtained by entering the Suspicious Hatch in ACT 1. Once inside, you would have to clear the dungeon and fight a boss in the end. After clearing ACT 1, head through the Greenish portal. She would ask you to buy a boat for 1000 gold from her shop and ask for the Horn item you obtained from the boss. Give this over to her and she joins your team.

NEZGLEKT- The Stargazer at the Riverside Camp is where you should go to get Nezglekt. Take the divination from the stargazer.

When you clear ACT 1, you should take the reddish portal and take the middle path toward the campsite.

Here, you would be tasked to carry an item with you and you should hang on to it until you reach ACT 4. Afterwards, make sure to follow the bottom path to the airship where you will then be able to unlock Nezglekt.