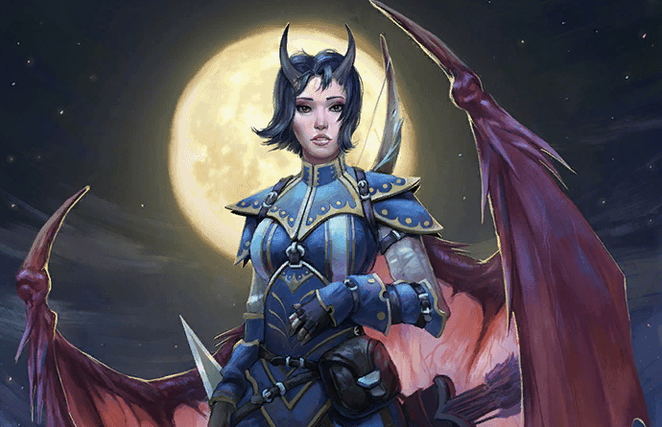 A succubus who rose above her demonic nature, Arueshalae makes an interesting addition to your companion roster. There are two ways to recruit her – one in act II, and the other in act III. But, the first option will have a few prerequisites…

How to Recruit Arueshalae in Pathfinder Wrath of the Righteous

The first option to recruit Arueshalae will only be available if you did a few specific things beforehand. First, you’ll need to have the Azata Mythic Path unlocked. For that, you’ll need to complete the Starward Gaze quest in Act I.

If you’ve decided to spare Ramien, found in front of the Temple of Desna, you’ll trigger the Starward Gaze sidequest, received from Ilkes. In it, you’ll have to find two Desnan adepts – Aranka and Thall the Wallflower.

Aranka can be found at Arendae Party House, while Thall is disguised as a Kenabres Crusader in the Market Square. Once you’ll find him, make sure to choose the options that will ensure Thall’s survival in the following dialogue. Once all adepts are found, you’ll need to sing the quest’s titular song to unlock the Azata mythic path

Now, once you’ll reach the Lost Chapel in Act II, go to the southern end of the map and play the song you were taught be the adepts there. To play it, you’ll need three items, each found in this location – northeast of the altar you’ll find the Small Sextant. Further in this direction, there will be a cave containing the Small Harp. The last item, called Map of Unknown Lands, is already at the altar.

The Song of Elysium

Now you’ll need to play the instruments in the correct order, which is: Middle, Right, Left, and Middle again. Now, along the items you’ve placed on the altar already, you should also find the Throwing Axe of Silence.

If you’ve fulfilled all of the prerequisites listed above, you should be able to recruit Arueshalae in Act II. You’ll meet her in the Drezen prison. All you need to do is sing the song learned in the Starward Gaze Quest!

If you didn’t meet all the requirements, you can still recruit Arueshalae in Act III, once you’ll reach the Greengates. She will give you a quest to defeat a creature called Jaruunicka. Though it’s not a particularly complicated quest, it will allow you to recruit the succubus much later in the game.

ALSO READ: Pathfinder Wrath of the Righteous: How to Merge Armies