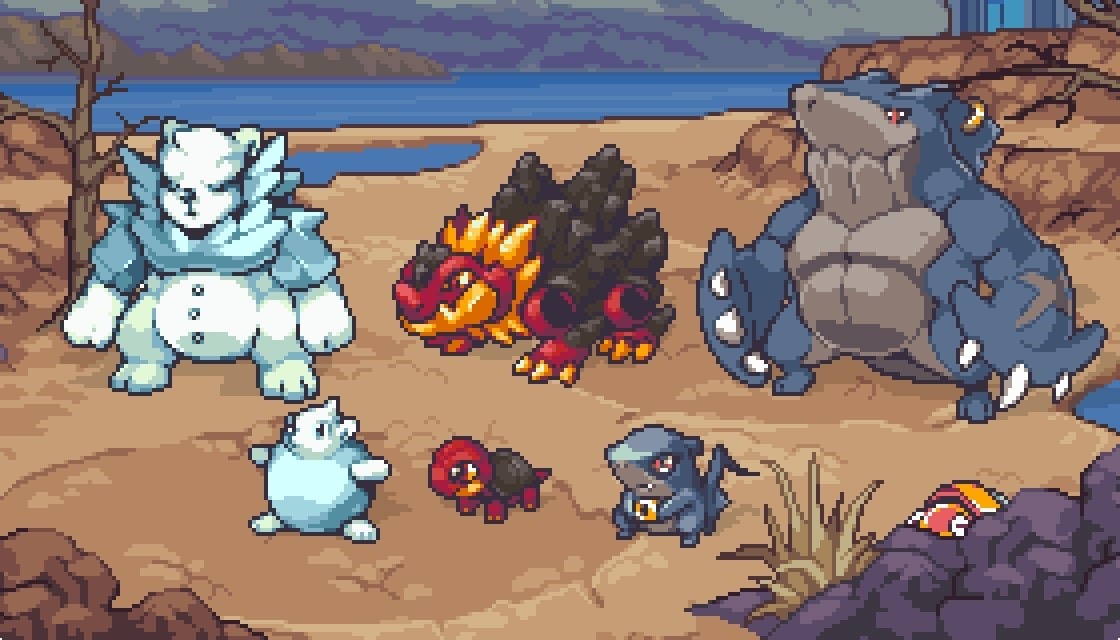 Evolution is a core mechanic of Coromon. Basically, your Coromon will undergo evolution once it has met the required level to evolve after the end of each battle. Depending on which Coromon you chose as your starter, each evolution will be a bit different, though the process remains the same.

There are three starter Coromons offered to you at the start of the game, pretty much like in Pokemon. You only get to choose one, so you’d want to pick a starter Coromon based on your preferred element. Let’s have a look at each of them.

Cubzero is an Ice type Coromon which features a polar bear cub-like appearance with its white fur and large snowball-shaped body. It comes with two traits namely Sharp Claws which prevents its Attack from getting lowered and Clumsy Power which increases its attack power at the cost of accuracy.

Once it reaches level 16, it will evolve into Aroara, maintaining Cubzero’s balanced overall stats. Its final evolution is Bearealis which still has a balanced stat spread but with a higher attack compared to its special attack.

Toruga is a Fire type starter Coromon that has a turtle-like appearance with a large head in proportion to its body. It has the Vegetarian trait which allows it to heal 20% of its max HP when using Fruit as well as the Thick Skin trait which grants it immunity against critical hits.

Toruga will evolve into Embaval once it reaches level 18, giving major increases to both its speed and special attack.

The third starter Coromon is Nibblegar, a Water type Coromon with the appearance of a shark but stands on two legs and carries a golden ring. It features the Supersensory trait which increases its most proficient stat each time one of its stats gets lowered, and the Fully Rested trait which reduces any damage it takes by a whopping 40% whenever it has full HP

At level 17, Nibblegar will evolve into Sheartooth, featuring a more robust and tankier appearance. Its stat increases favor defense as well as special defense with a little bit of attack mixed in.

Its final evolution is known as Megalobite, a badass-looking shark with very menacing arms to boot. However, it has actually undergone a design change that overhauled its overall appearance, making it look better in its current state.