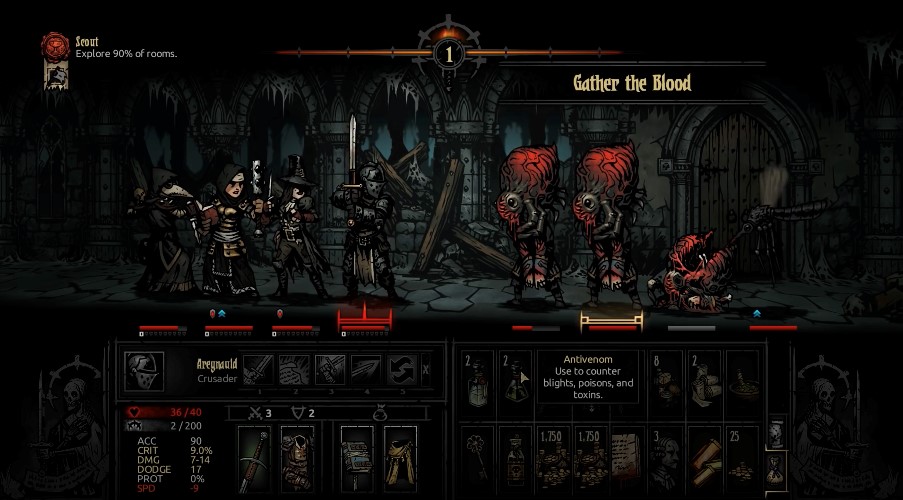 The Crimson Court DLC features various new things in Darkest Dungeon. One of them, the Crimson Curse status effect, has been annoying a lot of players in the game. This article will walk you through how to cure this curse.

How to Cure Crimson Curse in Darkest Dungeon

The Crimson Curse effect is acquired from certain enemies in the game. These are the Courtesan, Esquire, Manservant, Supplicant, and Sycophant. Once your character is affected, you will get a -5% Stun, Blight, and Bleed Resist, a -10% MAX HP, +1 SPD, and -10% Virtue Chance. If left untreated, your character can die.

There are two ways to prevent your character from dying. You can give The Blood to an infected character, which will allow them to enter the Bloodlust state. This will give you +25 DMG, +4 SPD, +15% Stun, Blight, and Bleed Resist.

Though it gives a huge buff, It’s important to keep in mind that the Bloodlust state can turn your character unstable and they may attack your other characters or deny a heal. The state will wear off after some time. This is where you will need The Cure.

You need to defeat one of the three major bosses namely, the Baron, the Viscount, or the Countess. Defeating any of them will cure all of your infected heroes. The Countess, in particular, will give you the option to cure the Crimson Curse in your Sanitarium. However, you should be careful since your characters can be infected again once cured.

ALSO READ: LEGO Star Wars The Skywalker Saga: All Extras Showcased | What Do They Do?