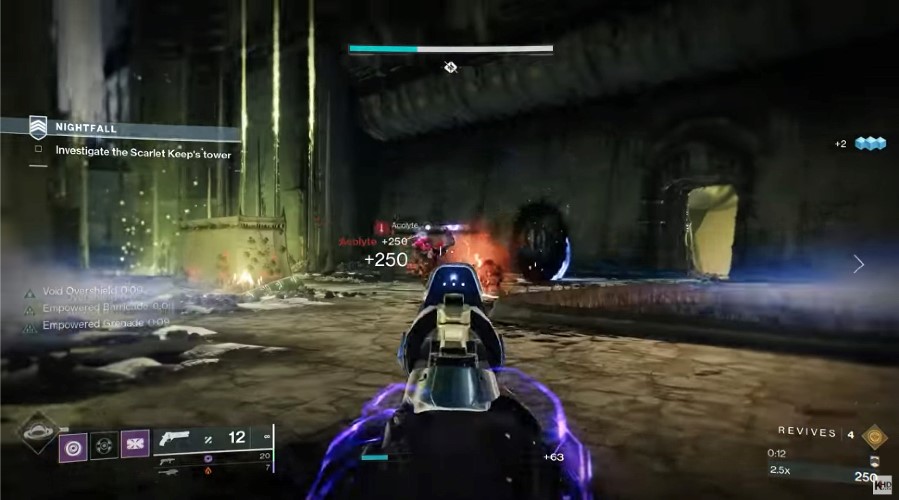 Grandmaster Nightfall requires extreme levels of coordination with either a premade fireteam or the unwavering will of a Guardian who is willing to take them on solo. Sounds hard? Don’t’ worry. We got you covered!

For this week’s Scarlet Keep, it is recommended to use a Titan, specifically a Sentinel with the Towering Barricade, Strafe Lift, Shield Throw, and Vortex Grenades abilities. These will help you defend yourself while still inflicting great damage. For aspects, you should have Controlled Demolition to increase the damage by the grenades, along with Offensive Bullwark and Bastion. For Fragments, you need Echo of Undermining, Echo of Leeching, and Echo of Remnants to weaken the enemies and increase the damage from Vortex Grenades.

For weapons, the Judgement Hand Cannon with Demolitionist trait is recommended so you won’t have to worry about ammo as this trait will allow the grenade to regenerate faster. For special weapon, the player should use the Deafening Whisper Grenade Launcher with the Wellspring trait as it will help regenerate abilities faster. You can also carry the Gjallahorn Rocket Launcher for explosive damage.

For armor, it is advisable to use the Heart of Inmost Light for chest armor as this will allow abilities to regenerate faster. For mods, you should put on Thermoshock Plating, Seeking Wells, Volatile Flow, Well of Tenacity, Font of Might and Elemental Ordinance. These will increase damage resistance, and ability regeneration.

For the weapon, the teammate can go for the Arbalest, Insidious Pulse Rifle, and Palmyra-B. For armor, they should go for the Aeon Swift, this armor grants the teammates with heavy ammo when an enemy is defeated. This ability complements the invisibility build. For mods, they should have Seeking Wells, Reaping Wellmaker, and Bountiful Wells.

A second teammate, preferably a Shadebinder in the Warlock subclass will work best with the team. For abilities, the teammate should choose the Coldsnap Grenade and Penumral Blast. For aspects, they should choose the Bleak Watcher and Glacial Harvest for spawning shards. For Fragments, Whisper of Fissures, Whisper of Conduction, Whisper of Bonds and Whisper of Torment are recommended.

For weapons, the teammate should go for the Fel Taradiddle Combat Bow with Archer’s Tempo and Explosive Head traits for the barriers. The Insidious Pulse Rifle and the Gjallahorn Rocket Launcher are ideal choices, too.

For armor, the Osiomancy Gloves is highly recommended as will provide them with two more Cold Snap Grenades. For mods, Elemental Shards, Elemental Charge, Protective Light and Striking Light are good options.

Scarlet Keep has an arc modifier where the Arc damage dealt is increased by 25 percent and the Arc damage received is increased by 50 percent. The Hunter teammate should take down Champions and Lucients with their invisibility. Doing so allows two teammates to inflict explosive damage with the Gjallahorn, without worrying about ammo.

On the elevator section of the keep, enemies will attack from all sides. Players will have to figure out a proper cover as barriers and shields will keep on sinking as the elevator goes up. Use the Gjallahorn to take down enemies instantly.

The Boss fight will be difficult. But there is an area in the map, outside of the boss fight area and behind the pile of skulls and bones, where players can regenerate their abilities and health. Be patient and wait for enemies to come near, rather than jumping straight into battle. It is also advisable for the players to use their heavies for the champions and not the boss as the latter can be taken down by any weapon.