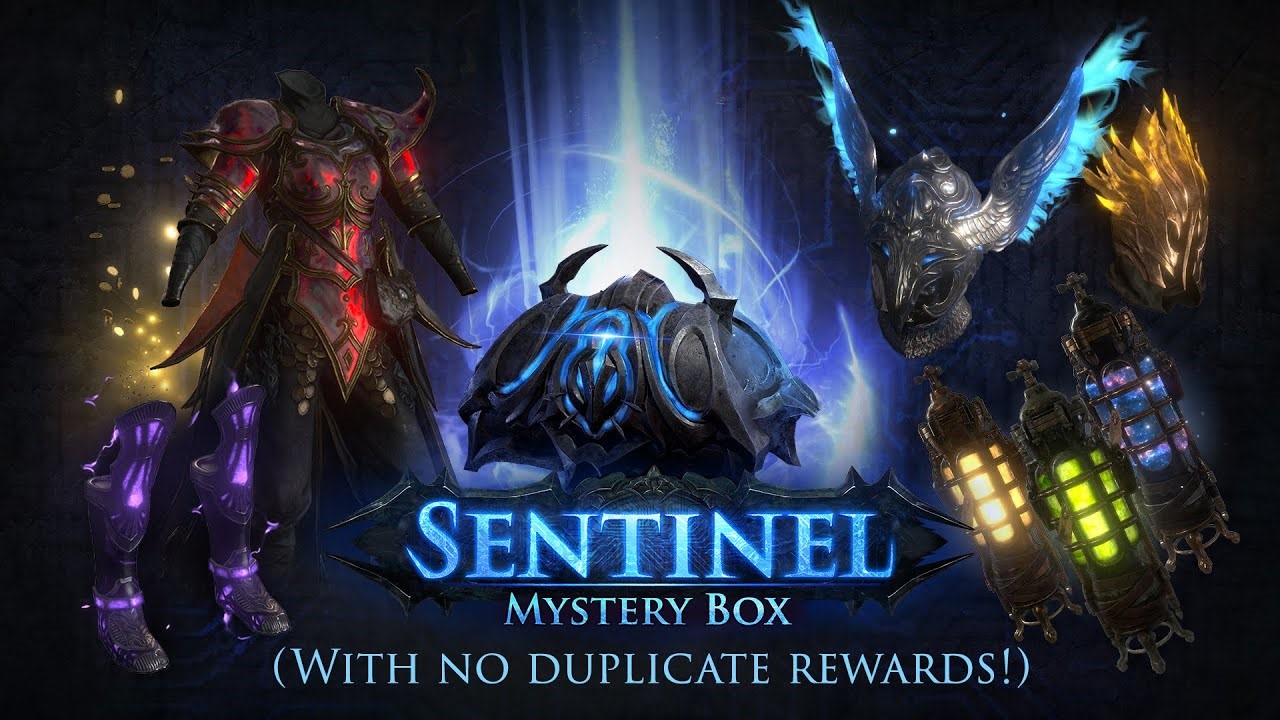 Customary to every release of a new league in Path of Exile, the upcoming league which will launch on May 18, Sentinel, features a mystery box that contains a number of cosmetics to add further customization to your characters.

According to GGG lead developer, Chris Wilson, the Sentinel mystery box is unique compared to the rest of their mystery boxes in that each of the cosmetics has its own thematic variations which add an extra layer of customization.

Let’s have a look at what you can expect in this all-new mystery box.

What’s in the Sentinel Mystery Box in Path of Exile?

The mystery box will feature 14 exclusive cosmetics that can only be obtained by opening it. Each of the 14 cosmetics will have an equal chance of opening, and each of them has different thematic variations. Since you won’t receive duplicates of each variation, it’s possible to obtain all of them provided you can afford to open as many mystery boxes as possible.

Let’s have a breakdown of the cosmetics included in the box and their variations.

This body armor cosmetic features four different variations. Three of these variations will depend on your individual elemental resistances, gaining more intensity the higher your resistances are.

Meanwhile, the prismatic variation will gain more intensity depending on your total elemental resistances.

The Stormstrider Boots come in five different variations. This cosmetic creates a lightning trail as you move, with its length becoming longer the higher your movement speed is.

This helmet cosmetic features four different variations which will catch flame and burn brighter the more fire skills you use within the last 16 seconds.

This back attachment cosmetic comes in 6 different variations, each having a different color. The tank will represent your current mana pool, with it emptying once your mana is depleted.

This bow cosmetic will fire an additional arrow depending on the number of arrows you’ve fired in your last attack. It comes in 4 different variations and the extra arrow it fires is purely cosmetic only.

This one comes in 4 variations and will peel off its outer layer each time you block an attack in the last 30 seconds.

Available in 5 variations, this cosmetic for gloves charges up electricity that grows in intensity depending on how many lightning skills you’ve used in the last 16 seconds.

This one comes in 4 variations and adds an effect to your weapon which coats it in metal. Also, monsters you killed will explode with treasure depending on how high your Item Rarity is. Then again, this is purely cosmetic only.

Similar to the mana tank cosmetic, the Ngamahu body armor will represent your current health and will glow even more if you’re at full health. It comes in 3 different variations.

This one replaces the visual effects of drinking flasks, be it life, mana, hybrid, or utility, with an energy burst that comes in 4 different variations.

This cosmetic which comes in 3 variations replaces your Endurance, Frenzy, and Power charges with floating crystals.

The Flare Character effect surrounds your character with a burning aura that gets more intense the higher your level is.

It also replaces the effect you get when you level up. It comes in 4 different variations.

The Shardcrown comes in 4 variations and replaces the appearance of your Frenzy charges with floating shards.

It also gains more shards on top depending on your maximum number of Frenzy charges.

Available in 7 variations, the Warp Rune lets you pick a specific spot in your hideout to teleport. All you need to do is place a warp destination in your desired spot then set its number to the same number as  your warp rune.