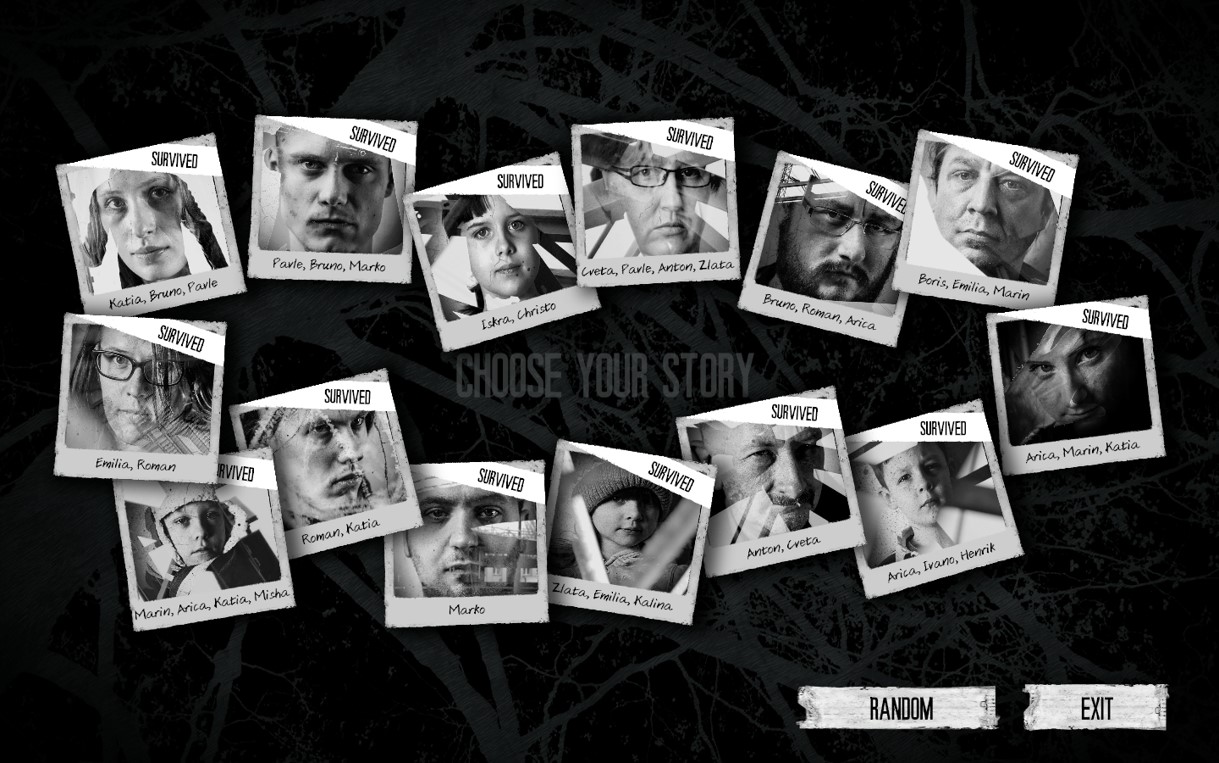 There are a lot of playable characters in “This War is Mine”, and on top of having their unique personalities and backstories, they all play slightly differently as well. In order o maximize your chances of survival, you’ll have to make the best use of all of their abilities.

The Story of All Playable Characters in This War of Mine

When you start a new game for the first time, you’ll either end up with Bruno, Pavle, and Marko or Bruno, Katia, and Pavle. But, there are other starting character packs available after you’ll finish one of these two.

Each of your characters can die easily during the game, so it’s possible another one will replace them. If you have less than 5 characters in your shelter, there’s a chance every 7-12 days there will be one additional survivor asking you to join your group.

There are a lot of differences between each character, and they are so distinct from one another, it’s hard to put them into groups. So, let’s look at each character individually.

A weak guard and poor scavenger, Anton specializes in catching small animals using traps. His mood is hard to affect, as he doesn’t drink alcohol or gets concerned over moral choices. But, if he is depressed and decides to leave the shelter, he will likely steal some supplies.

One of the best combatants in the game, Arica makes less noise when sneaking, making her an ideal choice for theft and stealth killing. Her mood changes rapidly, especially if her smoking addiction is not satisfied, but she doesn’t mind stealing or killing. She has a very small inventory size.

A very emotional man with strong moral compass, Boris is a great fighter and scavenger. He has the most inventory space and health out of all the characters, but he also runs the slowest and is terrible at stealth. Addicted to smoking.

By most definitions, Bruno is a selfish bastard who barely cares about the morality of his actions. He’s a great cook who can make food and alcohol with fewer resources and he makes a decent guardsman. Addicted to smoking.

Cveta’s main trait is her love for children, but she can also be used to efficiently cheer up depressed comrades. And though she has a strong sense of morality, and has frequent mood swings, she doesn’t have any addictions, making her a bit easier to satisfy.

Though Emilia doesn’t have many useful skills, she is a perfect candidate for doing anything immoral, like stealing or murdering. She is also both resistant to depression and hard to make content. She’s addicted to coffee.

Katia’s best feature is her ability to barter with traders. Combined with an average inventory slot, she can be used to scavenge purely for the chance of meeting a trader. She is susceptible to depression and is easily affected by immoral actions. She can also play the guitar and is addicted to coffee.

Being a handyman, Marin will use less resources when crafting. He isn’t particularly concerned with morality, but can get depressed easily, especially if his coffee addiction isn’t satisfied. He is a passable fighter.

Marko makes the best scavenger of the team, with a very high inventory capacity, faster scavenging time and decent combat abilities. He doesn’t have any addiction, but is susceptible to mood changes and gets easily affected by immoral actions

Pavle is the fastest runner in the game, with decent inventory space, average combat abilities and a strong moral compass. He doesn’t have any addictions, his mood changes easily, and plays the guitar

The best fighter in the game, Roman has high health, makes a great guard and plays the guitar. His mood barely changes and he is barely affected by the morality of his actions. He’s addicted to smoking

Zlata is great at consoling other characters and she can play the guitar very well. She’s extremely concerned about the morality of her actions and her mood changes easily. She doesn’t have any addictions.

ALSO READ: This War of Mine: Where to Put Rainwater Collector

Related Topics:This War of Mine