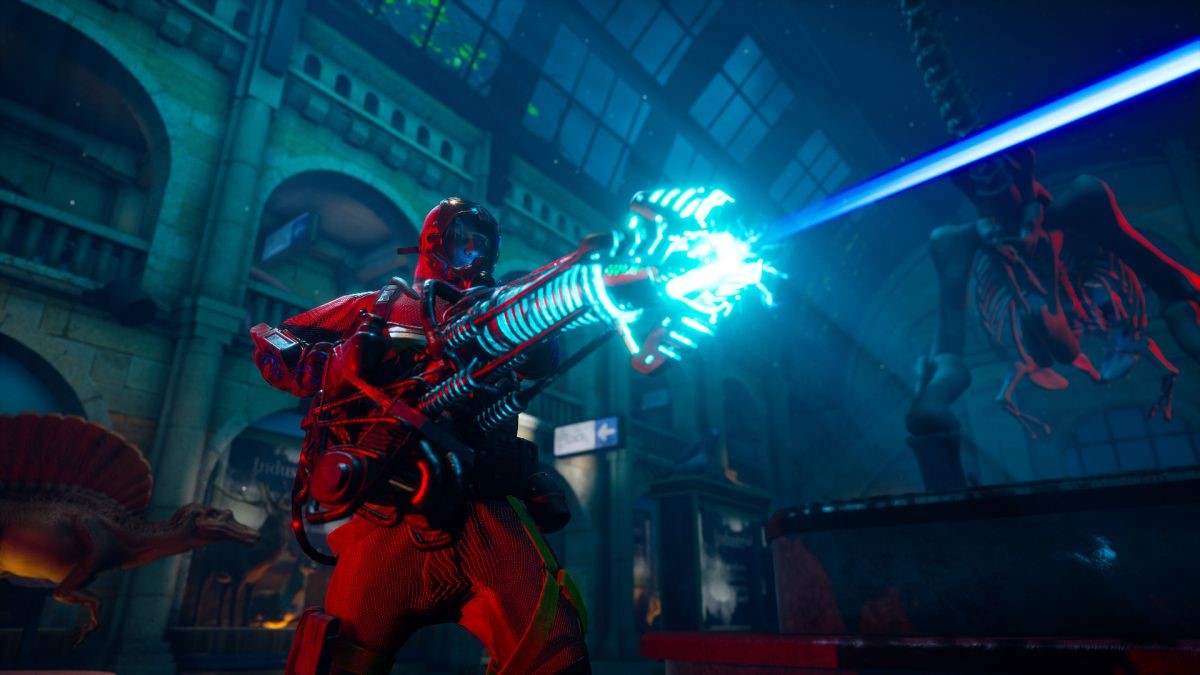 In each game of Midnight Ghost Hunt, you’ll either join the team of ghosts or ghosthunters. Each side comes with their own special abilities. The hunter’s goal is to kill all the ghosts before midnight or survive long enough after the ghosts power up to evacuate out of the building.

Depending on what part of the game you’re at, you might need a loadout that matches it best, so you should get acquainted with every possible Weapon, Gadget and Perk at your disposal.

Weapons are the most important equipment pieces for a hunter, so you should take some time to learn which one fits your playstyle the most. You can change your equipment at any time in the game using the generator.

Spectral Cannon – The most basic weapon, with a vacuuming feature that allows you to such up the remains of a defeated ghost so that it cannot be resurrected.

Project X – A gun with an incredible firing speed that can easily overheat.

Harpoon Bazooka – A weapon that deals little damage, but instead traps a ghost in place for a few seconds.

Reaper – This weapon works similarly to a sniper rifle, with a twist – though it deals medium damage, it also attaches an explosive dart to a ghost that goes off after 3 seconds. The ghost can prevent the explosion by possessing an object, so you should try to shoot it strategically, either in a heat of battle when it won’t know what hit it or when it’s far from any possessable objects.

Ghostsmasher – A melee weapon that works well on ghosts, but has little effect on objects they can possess.

Sledgehammer – Another melee weapon, this one effective against objects but not against ghosts.

Salt Shotgun – Deals heavy damage to ghosts and knocks them back.

Frostbite – Deals heavy damage to ghosts and slows down the objects they possess.

Gadgets are helpful little gizmos that can come in handy during the game, but are not as crucial as weapons.

Radar – Radar will give you general directions on where the ghosts are, although it’s not very accurate and it’s readings can be influenced by ghost activity.

Spectrophone – Shows you the general direction of the ghosts, but does not say how far they are.

Pathfinder – Shows you the footprints left by ghosts. These are only visible for 30 seconds after they were left.

Vacuum – allows you to suck up the ectoplasm left after killing a ghost, preventing it from getting resurrected.

Trap – It will hold a ghost in place for some time and deal a little damage, though it can be easily destroyed by ghosts attacks.

Grenade – Works like any other grenade, only it’s effective against ghosts, dealing high damage.

Defibrillator – Allows you to revive another hunter.

Grappling Hook – Allows you to hurl yourself across the map by attaching it to walls and other things.

C4 – Stationary explosives that can be attached to objects and ghosts. They deal a lot of damage.

Perks are “passive” abilities that provide boosts for your character.

Lightweight – Makes you more fragile, but increases your sprinting speed.

Juggernaut – Makes you slower and unable to sprint, but makes you resistant against stun effect and gives you more health.

Cold Blooded – Decreases the ghost’s ability to see you using their Percpetion Perk and after midnight.

Extended Mag – Gives you more ammo for weapons that use it.

Extra Gear – Gives you more ammo for gadgets that use it.

Quick Reload – Weapons that reload do so faster.