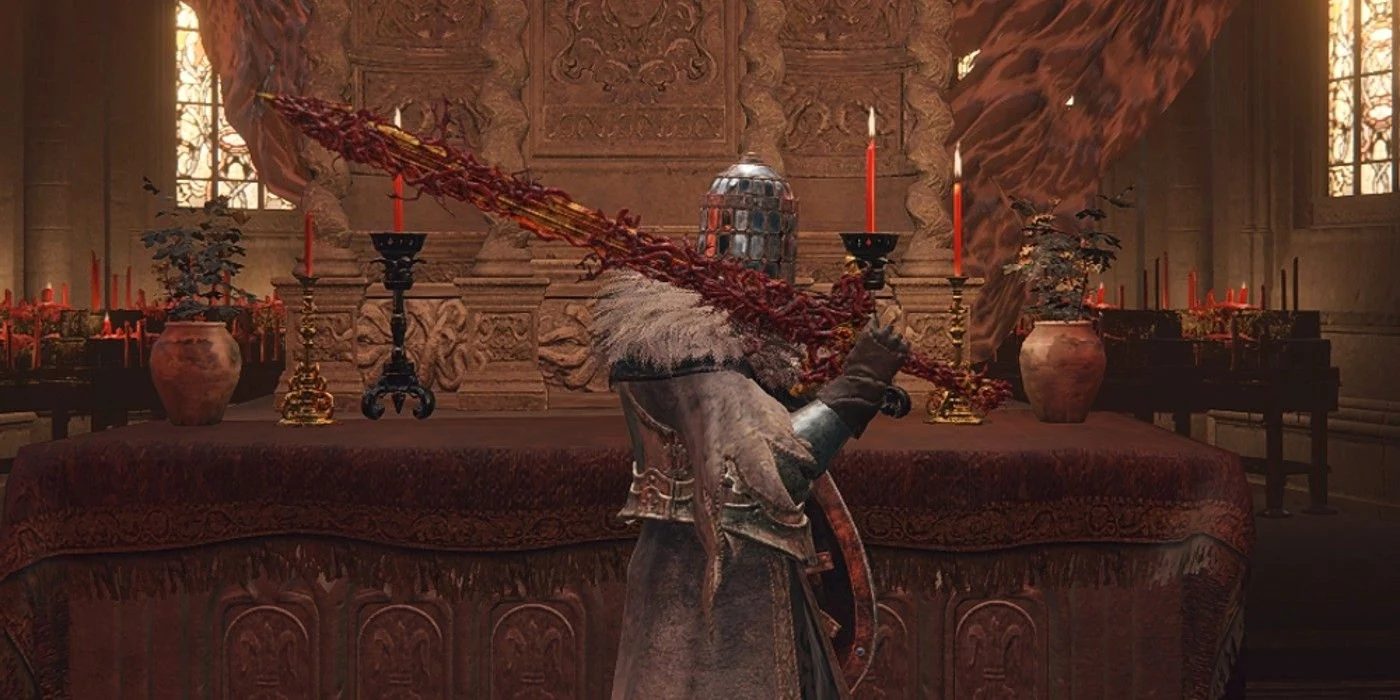 The Blasphemous Blade is one of the strongest armaments in the game, not in base damage but in its Ash of War, the Taker’s Flames. When it connects, it can deal devastating damage to your target and can even stagger it. What’s more, it even heals you for 10% of your max HP + 150 flat HP per enemy hit.

Lastly, the weapon also heals you for 4% of your max HP whenever you kill an enemy, even if the kill was not due to this weapon. It’s for this reason that the Blasphemous Herald build is so strong.

Let’s have a look at what makes up the build.

How to Build a Blasphemous Herald in Elden Ring

As mentioned, this build revolves around the Blasphemous Blade which is a greatsword that deals both physical and fire damage and scales primarily off of Faith. However, you won’t be relying on the weapon’s Ash of War alone. Instead, you’ll be dual-wielding the weapon on the right with the Gargoyle’s Blackblade on the left.

The reason why we’re going for this weapon is because it also scales off of Faith as well as Strength, allowing you to benefit from both stats. Compared to Blasphemous Blade, however, this one deals physical and holy damage. As such, you can just freely swap between each weapon whenever you want to fight an enemy that’s resistant to holy, fire, or vice versa.

The good part about this build is that you can still be tanky while dealing an insane amount of damage. In some cases, you might even shrug off enemy attacks and even trade hits in certain situations. As for the armor, you’ll want to use the Raptor’s Black Feathers for a damage increase to your jump attacks.

Meanwhile, use the Tree Sentinel gear for the rest for maximum protection without having to fat roll. You should also use the Dragoncrest Greatshield Talisman to increase your overall physical damage negation values.

Which Talismans to Use

As for the talismans, the Dragoncrest Greatshield Talisman mentioned earlier is necessary to help you tank and even trade hits. Then, you’ll want to equip the Claw Talisman to increase the damage of your jump attacks.

Keep in mind not to spam your ash of war. Instead, focus on jump attacks to deal massive damage and use the ash of war only when you have a window to pull it off. Then, you also want to use Radagon’s Soreseal for a +5 increase to your Strength, Vigor, Endurance, and Dexterity stats. This will increase the damage you take, though we can offset that with the Dragoncrest Greatshield Talisman.

Lastly, you’ll want to equip the Great Jar’s Arsenal to increase your equip load, especially if you don’t have enough investment in Endurance. This will prevent you from fat rolling while allowing you to wear heavy armor.

How to Play the Build

The gameplay of this build is pretty simple. First, you’ll want to buff yourself with the Golden Vow for that extra damage and defense bonus. Then, you’ll also want to cast the Blessing of the Erdtree incantation to provide you with a heal over time over a long duration. This will provide you with an extra layer of survivability even if just a little.

During battles, you simply have to spam your jump attacks whenever you get an opportunity to do so. Meanwhile, if the boss you’re fighting is within a safe distance or is staggered, you can spam the Taker’s Flame ash of war to deal huge damage and heal you at the same time.

ALSO READ: The Serpent Rogue: How to tame Dobhar-chu?