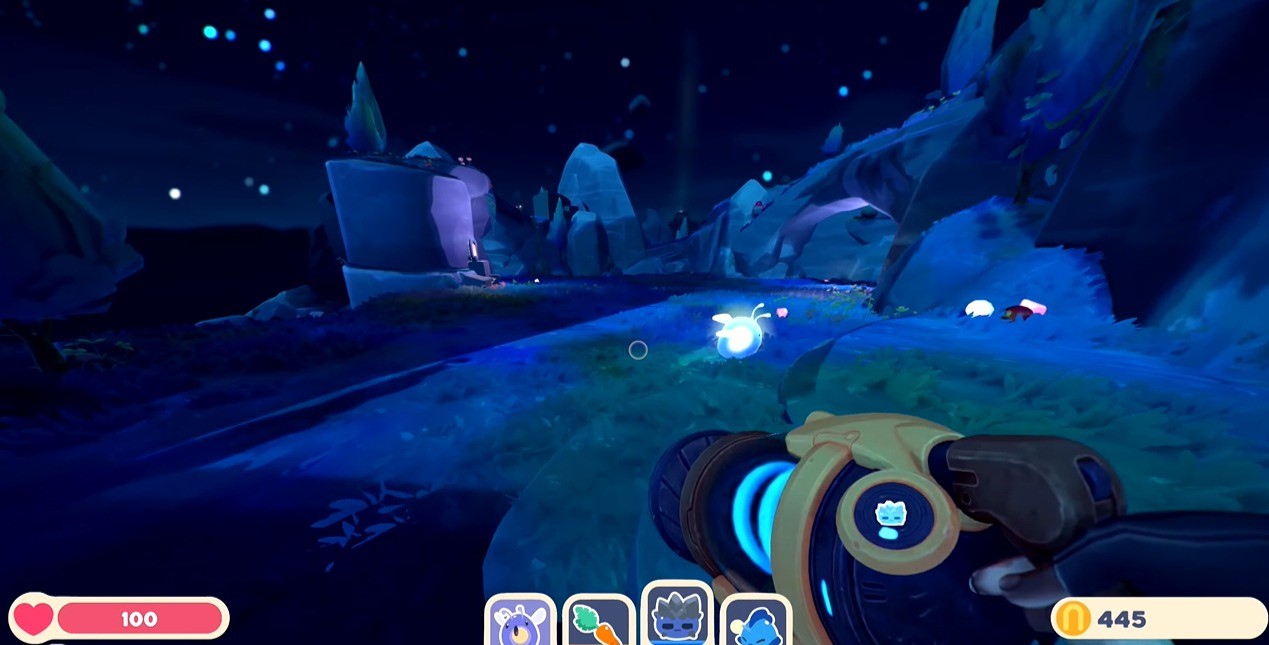 Slime Rancher 2 is brimming with various types of slimes across Rainbow Island. Rock Slimes and Angler Slimes in particular can be a little more difficult to locate, so we’ve pinpointed their exact spots on the map in an easy-to-follow guide on the new Angler and Rock Slime locations.

Rock Slimes can be easily identified by their bright blue color tone, and jagged rocks protruding from their body.

Conversely, Angler Slime is based on the Anglerfish in their design and is a darker shade of blue with a little glowing yellow light dropping from their head.

Accessing them will require ‘unlocking’ the Ember Valley region, which we’ll explain below.

While Angler Slimes can also be accessed through Starlight Strand, we recommend sticking to one region for both.

Where to Locate Angler and Rock Slime in Slime Rancher 2

Before you can access the region of Ember Valley, you’ll need to do a little bit of leg work.

This area is Northwest of Rainbow Fields. You’ll have to interact with a pedestal in Rainbow Fields (as indicated on the map below) to remove the pillars blocking the teleportation pad which will lead you to Ember Valley.

To do this, head to the Northwest region of Rainbow Fields. You’ll recall this as the region in which you first started the game.

Once here, look about for a Pink Gordo Slime – these are easily identified by their large size and pink hue. These slimes are fixed to one location and will not move about.

You’ll have to continue to feed the slime until it combusts. The Pink Gordo will consume fruits or other slimes – you don’t have to worry about what you feed it, like water lettuce.

Once it combusts, step into the spot it was in, and wait for the geyser to burst.

Once it does, it will lift and carry you. Once you land, look around for a device you’ll need to interact with to the left-hand side. This will bring down walls/pillars revealing a teleportation platform that you can use to enter Ember Valley.

After you’ve reached Ember Valley, head to the northwest. Rock Slimes and Angler Slimes can be found all around the region, but are most typically located within caves. When trying to capture a Rock Slime, pay particular attention to when it begins to start rolling.

Genshin Impact: All Primal Embers Locations in Try to Open the Coffin

Opening the coffin in The Secret of Al-Ahmar questline in Genshin Impact requires you to locate and release four Primal Embers.

In Genshin Impact, players can now obtain the questline “Golden Slumber,” which will have players trying to open the tomb of the late Scarlet King, King Deshret.

To do this, players will have to release four Primal Embers and follow them to their corresponding Primal Torches within the Mausoleum of King Deshret.

These Primal Embers are found fairly easily within the Mausoleum of King Deshret, and we’ll tell you all locations in “Try to Open the Coffin,” so you can unlock the secrets of the Scarlet King.

Take the stairs upward to the right-hand side of the main room. Then, take the far left corridor behind the trap mechanism there. Keep moving down the corridor until you reach the room with the Seelie.

Take another left into a new corridor, where you will swing yourself up to the upper level (Four-Leaf Sigil) towards the direction of the mural there. ‘Release’ the first Primal Ember here, and follow it to light the first Primal Torch.

Take the stairs on the right-hand side of the main room. This time, take the far-right corridor that is near the trap mechanism. You’ll then need to open the door with the Blue Book mechanic in front of it.

After this, follow down the corridor and take the right-hand path. Again, look up towards the mural and swing yourself to the upper level. Release the Primal Ember here and follow it to the second Primal Torch.

Take the stairs to the left-hand side of the main room. Then, head over into the right corridor. On your right side, take the first path. Head towards the mural and glide using the wind currant to land on the higher platform level. Release the third Primal Ember here and guide it to the third Primal Torch.

Take the stairs to the left-hand side of the main room. Head instead toward the left corridor. Keep an eye out for the mural on the left-hand side and swing yourself up to the upper level using Four-Leaf Sigil. Here you can release the fourth and final Primal Ember.

Some guides may indicate the Primal Embers done in different order, which doesn’t matter – as long as you are able to release all four, you’ll be able to complete the objective and quest.

After you’re located all four Primal Embers at their respective locations and released them to their Primal Torches, a cutscene will be played involving the opening of the coffin.