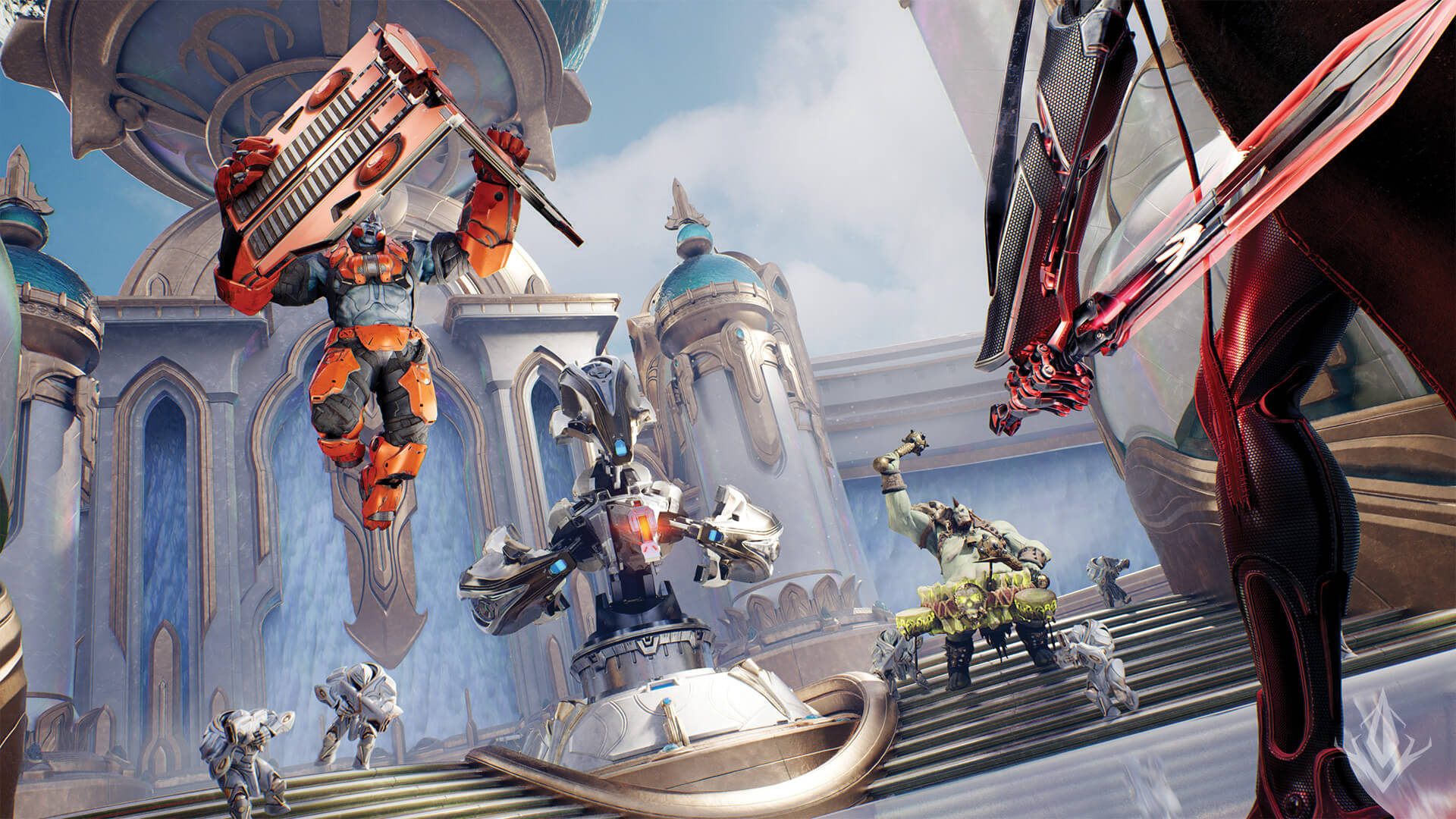 Like most MOBA’s, Predecessor features a huge selection of different heroes you can play as, each offering a different playstyle. To find your match, you’ll have to first get acquainted with all of their special abilities.

All Heroes and Abilities in Predecessor

The abilities of each here will be listed under his name, with the button used to trigger the skill first, it’s name second and it’s description last.

RMB – Old Rusty –  Drongo throws his boomerang dealing 40/55/70/85/100 (+40% Physical Power) physical damage and applies a 20% Slow for 1s to enemy targets within it’s path. Once it hits the world or travels 1,800 units the boomerang returns to Drongo dealing the same effects on its way back.

R – Shrapnel Cannon – Drongo fires a blast of shrapnel from his bazooka that deals 200/250/300 (+60% Physical Power)  physical damage and applies a 35% armor shred to Enemy Targets for 8s. The blast will knock Drongo back in the direction opposite of where he is aiming and will push back any close by enemy targets.

R – Earth Shatter – Fang Mao slams his blade on the ground, executing enemy targets within the area that are below 225/400/575 (+120 Physical Power) health while dealing the same as physical damage to enemy targets not under the threshold for execution. If an enemy hero is executed, Earth Shatter can be recast within 12s at no cost

Passive – Precision Strike – Feng Mao’s basic attacks deal 20% (8% of the target’s current health) as additional physical damage. This effect cannot occur again until Feng Mao has not taken or dealt damage in the past 3s or achieves a takedown

E – Harvest Nettles – Fey throws a long range projectile that deals 75/105/135/165/195 magical damage to the first enemy target hit. Refunds 50% of the mana cost on enemy hero hit or if the target is killed. Consecutive hits on the same target within 7s do 15% more damage, stacking up to a maximum of 45%

R – Fly Trap – Fey summons a giant plant that attaches to nearby enemy heroes within the target location. After 0.3s the vines pull the attached enemy heroes to the plant dealing 150/225/300 magical damage and applying a Stun for 1.4s

Passive – Nature’s Vengeance – When Fey achieves a takedown, she gains 15% movement speed for 5s and spawns an Untamed Growth where the enemy hero died

Passive – Shock Absorber – When Gadget first receives an instance of damage from an enemy hero or a jungle minion, she will gain a shield equal to 15% of her maximum mana for 4s. After expiring or being destroyed, the shield will explode dealing 80 (+8 per level) (+60% Magical Power) magical damage to enemy targets within 500 units

E –  Torn Space – Gideon opens a portal for 5s and jumps through to the target location. All heroes can follow him through the portal by jumping into it, but enemy heroes are slowed by 50% for 1.5s when they pass through

R – Black Hole – Gideon rises up, creating a Vlack Hole that slowly pulls enemy targets towards it, dealing 540/810/1080 (+180% Magical Power) magical damage over 3.5s. This is a channeled ability, which means it can be interrupted by Hard Crowd Control (Stun, Silence, etc.)

Passive – Cosmic Power – Damaging an enemy hero with an ability charges your cosmic power for 4s. Gideon’s next basic attack creates a link between him and first enemy target hit, slowing them by 20% and dealing 38 (+60% Magical Power) magical damage over 3s

E – Crush – Grux lunges forward a short distance uppercutting nearby enemy targets within 250 units dealing 70/105/140/175/210 physical damage, knocking them up and stunning them for 0.75s

R – Warlord’s Challenge – Grux slams his clubs together, stunning nearby enemy targets for 0.5s For the next 8/10/12s, Grux gains 30/50/70 attack speed and steals 4/7/10 physical power from enemy heroes that he basic attacks for 4s.

E – Land Mine – Howitzer places a mine at the target location that will explode after 3 seconds, knocking any enemies (and Howitzer) back and dealing 100/130/160/190/220 (+50% Magical Power) magical damage. Land Mine can be reactivated to detonate early.

R – Make it Rain – Howitzer launches up 750 units allowing him to move freely and cast abilities from the sky for 5 seconds. During this time R2000 Missiles cooldown is reduced to 1 second and its damage is increased by 10%.

Q – Shadow Walk – After a 1.5 second delay, Kallari becomes Camouflaged and gains 10% movement speed for 6/7/8/9/10 seconds. If she uses a damaging ability or basic attack, the Camouflage will end. Her next basic attack that hits an enemy target from Camouflage will deal 10/25/40/55/70 (+30% Physical Power) bonus physical damage.

E – Death Mark – Kallari empowers her next basic attack or damaging ability within 5 seconds to apply Death Mark to the first target hit. Death Mark will increase damage dealt by Kallari to the target by 10% for 3 seconds, after which the Mark will Pop dealing 60/95/130/165/200 (+8% +(3.333% Physical Power) of the target’s missing health) true damage and grant her 30% decaying movement speed for 3 seconds.

Passive – Shadow Dance – After Jumping, press jump again to have Kallari flip into the air up to two times.

Passive – Spirit Regeneration — Khaimera’s health regeneration is boosted by 1.2 (+0.3 x level) for 2.5 seconds each time he lands a Hack, Ambush, or Cull attack on an enemy Hero or Jungle Minion. This effect stacks up to 30 times. At 15 stacks, Khaimera gains 15% movement speed.

Q – Seismic Assault – Lt. Belica generates a shockwave in the target direction, dealing 90/125/160/195/230 (+70% Magical Power) magical damage to all enemies within the area, knocking them up and applying a 1.3/2 second stun. At maximum rank, increases stun duration.

Q – March! – Grants Narbash and nearby allies 20% a movement speed boost that decays over 2 (+0.2 per stack of Rhythm) seconds. Narbash gains 4 stacks of Rhythm.

Passive – Beatdrop — When Narbash successfully lands Basic Attacks, Damaging Abilities or casts Abilities he gains a stack of Rhythm up to 16, Narbash’s Abilities gain bonuses based on his Rhythm. Stacks fall off individually after 8 seconds. At 16 stacks of Rhythm, Narbash gains 6 mana per second (+2 per nearby allied hero) for 6 seconds.

RMB – Pounce – Rampage will leap a short distance before slamming down to the ground dealing 80/120/160/200/240 (+50% Physical Power) physical damage to nearby enemy targets. The leap can be cancelled early by suing LMB

R – Behemoth – Rampage grows in size for the next 8/9.10s. During this time, his abilities are enhanced. King of the Jungle’s health regeneration is multiplied by a factor of 5 and is active everywhere on the map. Boulder throw can be thrown instantly, but at a shorter range. Rumble’s cooldown is decreased by 50% and Pounce range is increased.

R – Skewer – Ritkor skewers all enemy targets in front of him dealing 125/200/275 (+40% Magical Power) magical damage and stun them for 1.5s. After the Stun, Riktor rips the skewers out, dealing the same damage again.

Passive – Riot Shield – Riktor shields himself for 12% of his maximum health. This shield will last until broken and refreshes if he damages an enemy hero with skewer or has not taken damage in the last 10s.

RMB – Piercing Shot – While holding, Sparrow charges a powerful arrow that deals up to 60/80/100/120/140 (+120% Bonus Physical Power) physical damage to all enemies in a line, up to 2,200 units away. The arrow will travel through both enemies and the world. Deals 20% increased damage per Relentless stack.

E – Heightened Senses – Sparrow gains 20/25/30/35/40 attack speed for 3 seconds. Duration is increased by 0.5 seconds per successful Basic Attack while active up to a cap of 8 seconds.

Passive – Relentless — Dealing damage to an enemy hero grants Sparrow a stack of Relentless for 5 seconds causing her basic attacks to deal an additional 0.4% of the target’s maximum health as physical damage on-hit per stack. This effect stacks up to 6 times and refreshes the duration when a new stack is granted.

R – Shield Slam – Steel slams down at the target location, dealing 200/300/400 (+80% Magical Power) magical damage, knocking up all enemies and stunning them for 2 seconds.

Passive – Battering Barrier — Steel gains a 20 (+6% Maximum Health) shield for 4 seconds whenever he hits an enemy hero with an ability. Can stack with each other