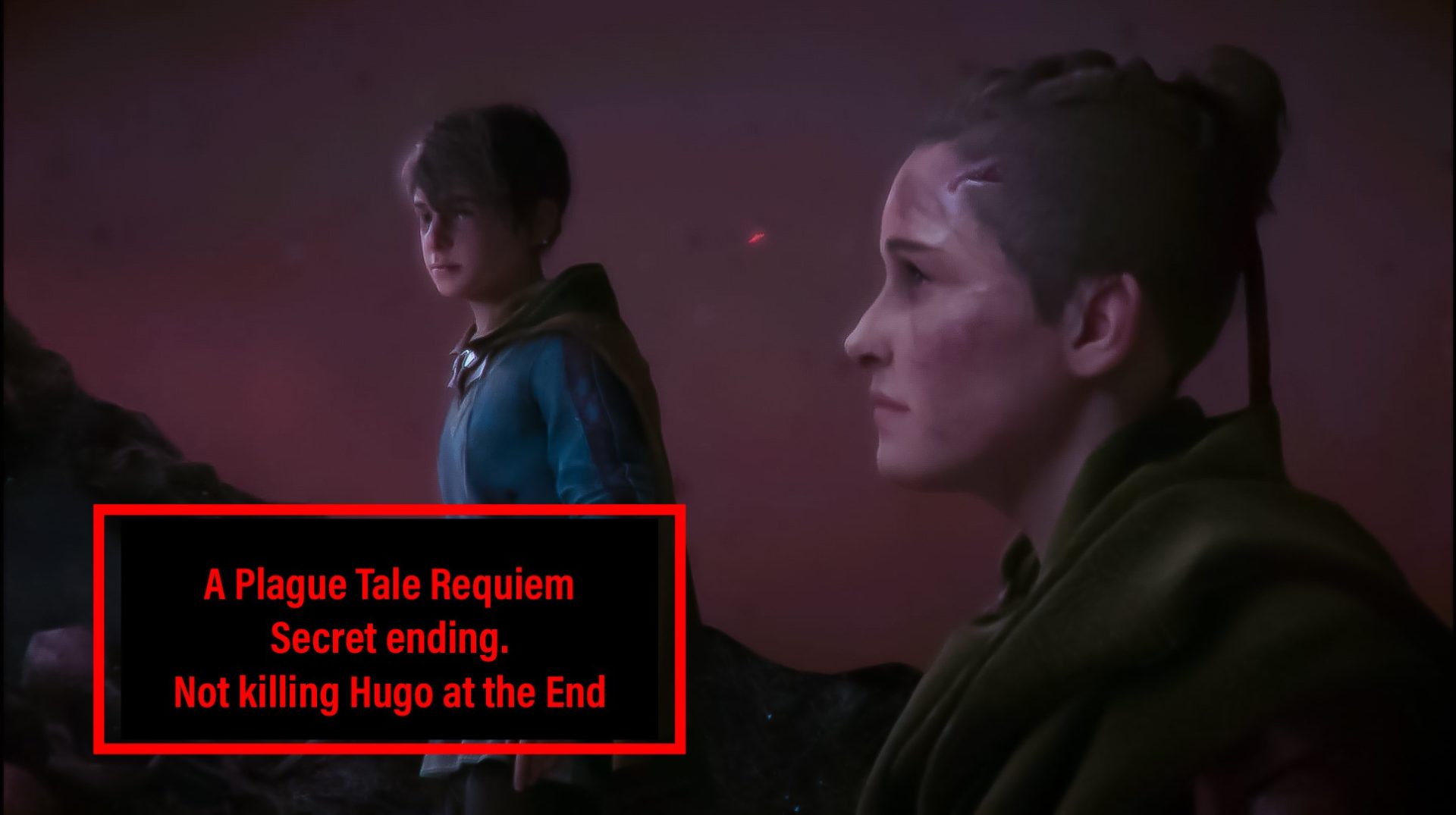 We finally got to finish A Plague Tale Requiem and the game was really something. All the time we had invested in this game left us with a bittersweet experience.

The story is straightforward. It leads you to the same conclusion in the end. The choices you are asked to make in the game just you to the same ending no matter what you choose.

Ask any of us who played the game and you will understand what we mean. Better yet, try to play the game and discuss it with someone who did.

Imagine our surprise when rumors started circulating about a secret ending where you don’t sacrifice Hugo in the end.

After all, the main plot of the story was to help Hugo find a cure for the plague’s sickness and you even end up getting away from it all, for him to live out his life far from the Plague infested city in hopes of controlling his sickness.

We quickly took up the courage to go through one last depressing run on the final chapter to find out if the Secret Ending will affect the story for better or for worse and here’s what we found out.

Here is the part where you can trigger the secret ending. This is where you end Hugo’s life to stop the Plague from spreading.

When Amicia tells Lucas that she will be the one to end Hugo’s life, don’t take the shot. Just leave it and wait for a few seconds.

Amecia will say that she can’t do it. We understand where she’s coming from.

The game started with you being Hugo’s Protector after all and every depressing and horrific obstacle you had to go through was to keep him safe and find a way to cure him.

With you unable to do the job, another Plague Outbreak is inevitable. Lucas steps up and takes the shot before he says he’s sorry.

In all honesty, We should have seen this coming. With all the choices we made throughout different gameplays leading to one inevitable conclusion, it’s to be expected that Hugo will have to die in the end.

Hugo dying by your hand or at the hand of another doesn’t change the outcome of the story. The same cutscene plays out in the end as A Plague Tale Requiem finishes with its story.

How All The Characters Work In Marvel’s Midnight Suns 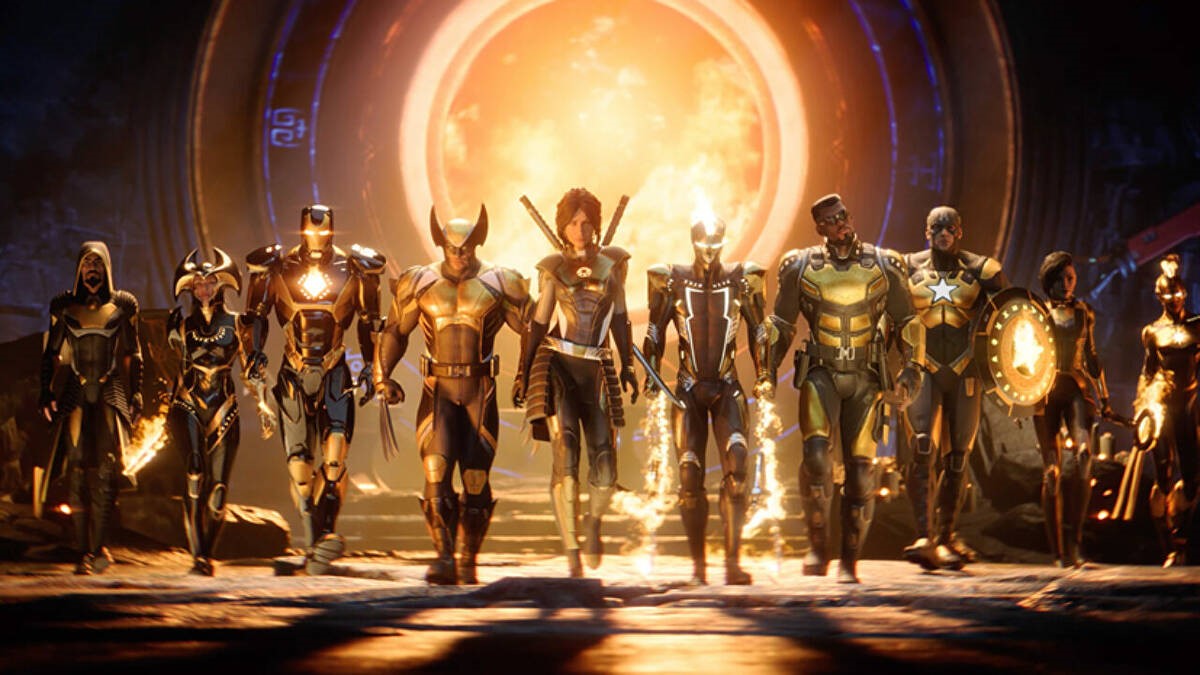 Midnight Suns is Marvel’s newest approach to the video game world, a tactic RPG that visits the darkest corners of the Marvel Universe. The Hunter is assembling an unlikely team of superheroes and dangerous supernatural warriors to fight against the Mother of Demons’ apocalyptic threats. Do you know which characters are in the game and their strengths and weaknesses? That’s what this guide is here for!

Marvel’s Midnight Suns – How All The Characters Work

Here’s a list of the characters available at the game’s launch:

The Friendly Neighbourhood Spider-Man is Midnight Sun’s most efficient Hero. While he will not deal tons of damage, he has the potential to do a lot with little to no cost.

His rapid-fire agility combined with Cards that allow him to perform area attacks, including environment attacks, without Heroism cost and adding more moves to the turn can be a game-changer when used wisely.

His THWIP! Card is also one of the best crowd control moves in the game, not only preventing targets to move but also removing their protection.

The Pride of America is the juggernaut of Midnight Suns. While Cap has offensive moves (like his Legendary Card that converts Block to damage all enemies in a line), his major strength lies in defence.

He acts as a shield for the rest of the team, able to divert enemies’ attention to himself and absorb insane amounts of damage.

While Captain America’s focus is on defence, Blade is a killing machine! He easily alternates between his favoured katana and ranged weapons to deal vast amounts of damage.

He can also infect enemies with Bleed, which deals damage over time on enemies and heals himself. In short, Blade is your damage-heavy guy, but he doesn’t do a lot more, so you should take that into consideration when devising your strategy.

Wanda Maximoff is the queen of area-of-effect damage! Her Cards can increase her AOE damage even more while also building up Heroism.

She can debuff enemies and grant resistance to allies, and one of her coolest Heroic abilities forces enemies to attack one another.

All of this done at a caster-friendly distance. The Scarlet Witch can also shroud herself in magic in case any enemy approaches, but you might want to consider placing a defender near her, especially in situations where Wanda will be crucial to your strategy.

Marvel’s hot-tempered Canadian is a tank who put his deadly claws to use in excellent melee chain-attack skills.

Wolverine can taunt enemies, diverting enemies’ attention to himself, making him a great damage mitigator as well as a damage dealer. His healing factor ensures he can survive the damage he bravely embraces, and there are many Cards that improve his healing powers.

Captain Marvel also fits into a tank role, but contrary to Captain America, her Binary Mode makes a good argument for playing her offensively.

This mode is activated after playing three Captain Marvel Card plays, and it doubles the damage of all her abilities! One Step Ahead is a Card you’ll want in your deck as it makes it easier to reach Binary Mode. Destroy the demons with cosmic energy!

Sister Grimm (Nico for friends) is a character who thrives on randomness. She can be a great defence by healing allies and dealing a lot of damage, but she cannot target the enemies she will affect.

She also has abilities to generate Heroism.

Ghost Rider can wipe out enemies, but there’s a catch: most of his Cards have a negative effect like stealing his HP or discarding random cards. This makes Ghost Rider a risk-reward character that demands more strategy to use well than most of the cast.

Additionally, he can regain health by consuming the soul of knocked-out enemies. But even that comes with a downside, so pay attention!

While Ghost Rider is a risky character, Doctor Strange is one of the safest. His aim is to enhance any team he’s in with buffs, resistances, and other utilities. And that’s not to mention his passive ability to generate Heroism at every turn!

Since Strange can work in any team, a good idea is to place a defender or damage mitigator close to him.

Magik’s portal generation powers allow her to crash enemies against one another, hitting more enemies in a single turn than most of the other characters can.

She can also shift enemies around the battleground, giving you opportunities to change and improve your strategy.

Iron Man is a jack-of-all-trades who can adapt to any enemy or situation thanks to his armour’s numerous weapons and gadgets.

Last but not least, the Hunter’s abilities will depend on each player since she can be customised to focus on damage, control, support, mitigation, or any combination thereof.

I hope this guide was useful, and you’ll feel better prepared to face the Mother of Demons!